Putin's 'pals' facing the big freeze in Britain: From telecoms tycoon with £50m Surrey estate to energy magnate who owns £65m Highgate mansion... the billionaire oligarchs with multi-millions in property and businesses in UK

Liz Truss has warned Vladimir Putin that he and his cronies face a ‘quagmire’ if he invades Ukraine and Russian oligarchs close to the Kremlin will have ‘nowhere to hide’ from sanctions.

The Foreign Office is today expected to announce the enhanced sanctions which will allow Britain to target any ‘strategic interest’ of the Russian state – not just those directly destabilising Ukraine.

Targets would include financial institutions and energy firms as well as Mr Putin’s wealthy supporters, the Foreign Secretary has said.  Asked if the new powers could include the ability to seize property in London, Miss Truss said: "Nothing is off the table'.

No oligarchs have been named by the Foreign Office, but there are scores with bases in London. These include many of Britain's richest men including Alisher Usmanov, who has made more than £13.4billion from gas and telecoms and until recently owned 30 per cent of Arsenal FC. He splits his time between his Highgate home and Surrey mansion.

Once Russia's richest man, oil tycoon Oleg Deripaska, is reported to have two homes in Belgravia while father-of-five Mikhail Fridman calls Britain his home after buying Athlone House in North London for £65million in 2016.

'Any company of interest to the Kremlin and the regime in Russia would be able to be targeted,’ Miss Truss told Sky News. ‘So there will be nowhere to hide for Putin’s oligarchs, for Russian companies involved in propping up the state.’

The London Stock Exchange is the leading foreign trading platform for Russian companies. Around 60 companies with a combined worth of £70billion are listed in the UK including Gazprom, Rosneft, Sberbank, VTB, Lukoil and Norilsk Nickel.

Andrey Kostin is president and chairman of VTB Bank, Russia's second-largest bank, which is controlled by the state and has a London-based subsidiary. He was named last year by detained Kremlin critic Alexei Navalny as someone who should be targeted by Western governments in a bid to curb human-rights abuses by the Russian state. Mr Kostin says the West is waging an 'economic war' on Russia. 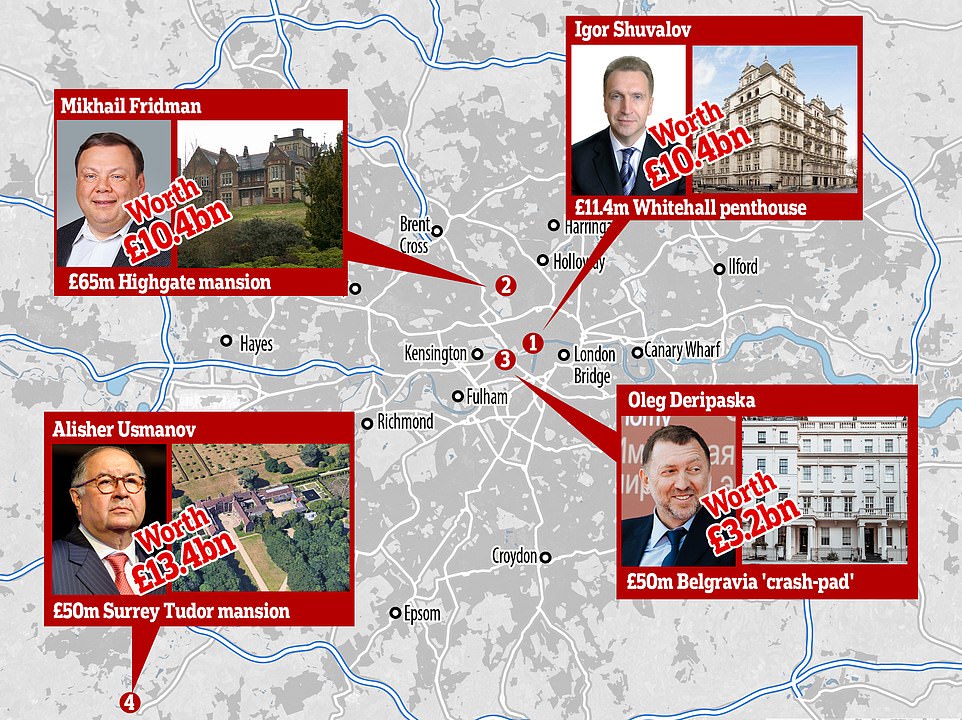 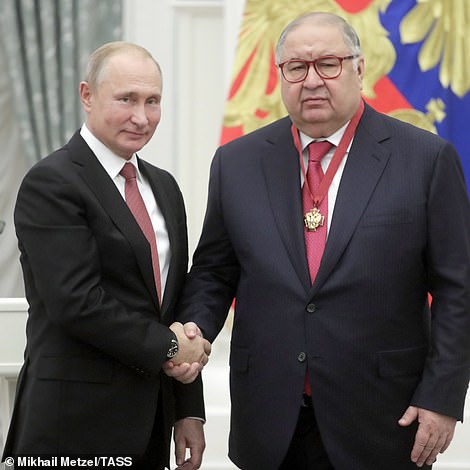 Alisher Usmanov (right), until recently a Arsenal shareholder, pictured with Vladimir Putin in 2013. He has links to Everton

Uzbek-born Russian Alisher Usmanov is ranked by Forbes Magazine as the third most-important oligarch in Russia, with an estimated net worth almost £14billion - up £2billion over the past two years.

He lives in London, where his Russian telecoms giant MegaFon is listed. His main home is Beechwood House, in north London.

He also owns Sutton Place, a grade I listed Tudor mansion near Woking in Surrey, which was once famously owned by Jean Paul Getty.

Both properties are worth a combined £100million or more.

He made a fortune by investing in metal and mining companies in the 1990s.

He headed Gazprom Investholding, a subsidiary of the world's biggest extractor of natural gas Gazprom, from 2000 to 2014 and still owns a stake in iron ore and steel giant Metalloinvest. He also owns the Moscow newspaper Kommersant and a telecoms company.

For more than 10 years he owned 30 per cent of Arsenal - but recently sold out to American billionaire Stan Kroenke. 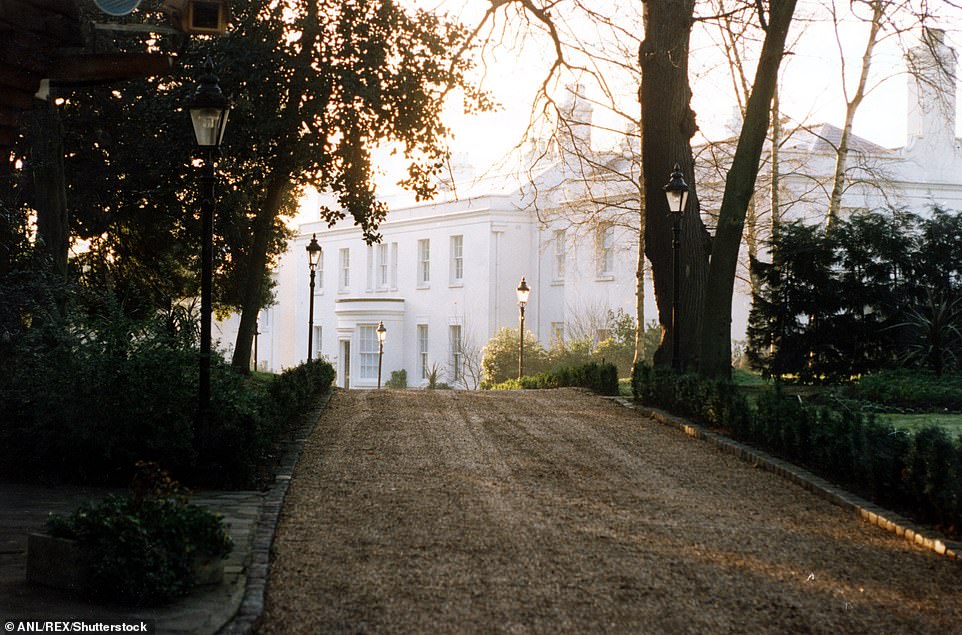 Usmanov lives in London, where his Russian telecoms giant MegaFon is listed. His main home is Beechwood House, in north London 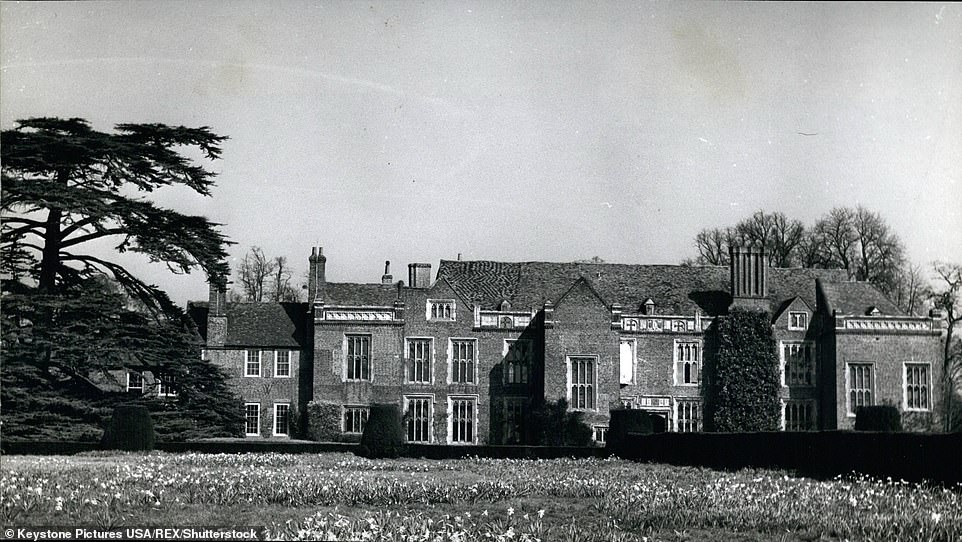 Usmanov also owns Sutton Place, a grade I listed Tudor mansion near Woking in Surrey, which was once famously owned by Jean Paul Getty

His company, USM Holdings, has links to Everton where USM chairman Farhad Moshiri is owner. USM also has a naming rights deal at Everton's training ground. He is not classified as a 'related party' despite his close links to the Liverpool club. He is investing in Everton via his plethora of businesses rather than buying up shares.

Born in Uzbekistan when it was part of the Soviet Union, he hoped to become a diplomat, but was jailed in 1980 for corruption. He served six years but the Uzbek supreme court later quashed the conviction, saying the case had been politically motivated.

Now 68, he has spoken of his pride at his friendship with Vladimir Putin, adding: 'The fact that everybody does not like him is not Putin's problem.'

In 2015 he was reported as being a member of Russia 2018 World Cup local organising committee, which is at the heart of FIFA's relationship with Russia.

His official biography records that in 2013 Usmanov was awarded the 'Order for Service to the Fatherland for his services to the (Russian) state' and also the 'Order of Alexander Nevsky' and the 'Order of Honour of the Russian Federation, for his professional achievements and contribution to business' as well as the 'Medal for Contribution to International Cooperation by the Ministry of Foreign Affairs.' 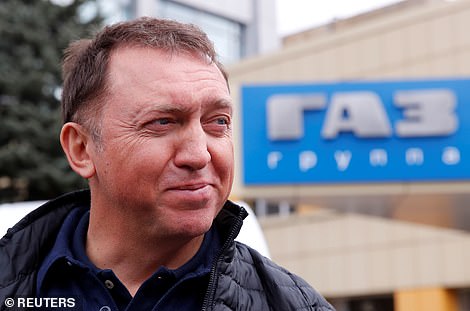 Oleg Deripaska (pictured), who was once Russia's richest man, owns a house in Belgrave Square and is a grandson by marriage to the late leader Boris Yeltsin

Once Russia's richest man, oil tycoon Mr Deripaska came to prominence in the UK when he entertained Labour grandee Lord Mandelson on his yacht in Corfu.

The tycoon – who is close to Mr Putin – quit as a director of Russian energy giant EN+ Group after being targeted by the sanctions. He owns a house in Belgrave Square and is a grandson by marriage to the late leader Boris Yeltsin.

Last year he tore into the FBI and 'utter stupidity' of the American government in a lengthy statement on Wednesday, a day after homes linked to him in New York and Washington were raided by the agency.

A spokesman for Deripaska said the searches stemmed from sanctions imposed on him in 2018 and that the homes belonged to his relatives. But on Deripaska indicated both pieces of luxury real estate were 'abandoned.'

Deripaska is a close associate of Russian President Vladimir Putin who's been accused of helping the Kremlin conduct foreign influence operations. 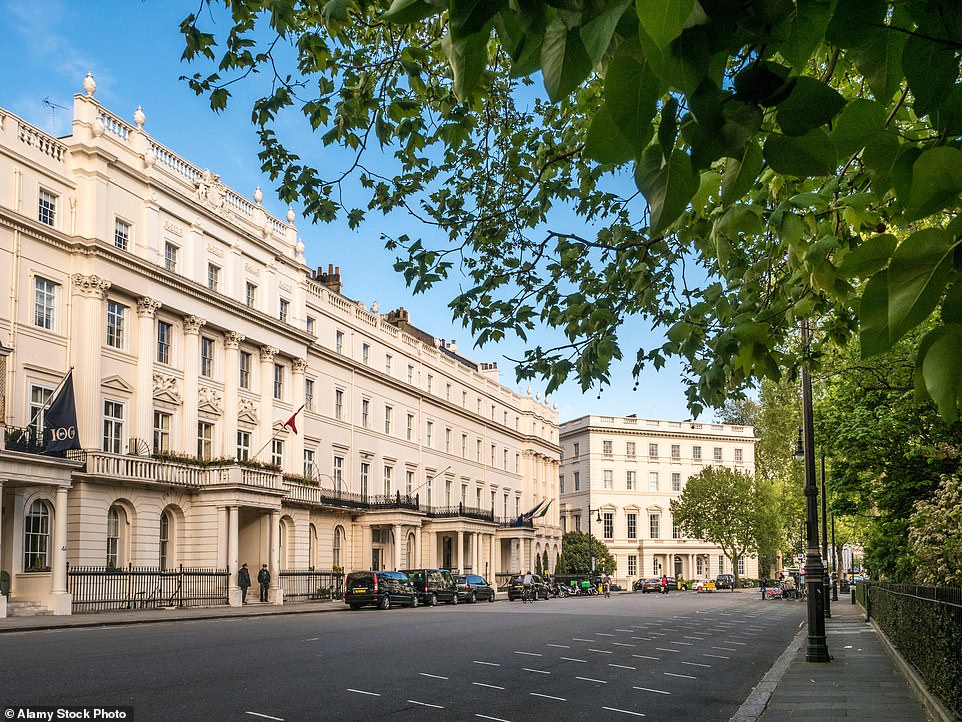 Deripaska and other members of Putin's inner circle as well as 12 Russian businesses connected to them were blacklisted by the Treasury Department in 2018 over alleged international crimes. However, Donald Trump lifted sanctions on three companies connected to him despite objections from Congressional Democrats. 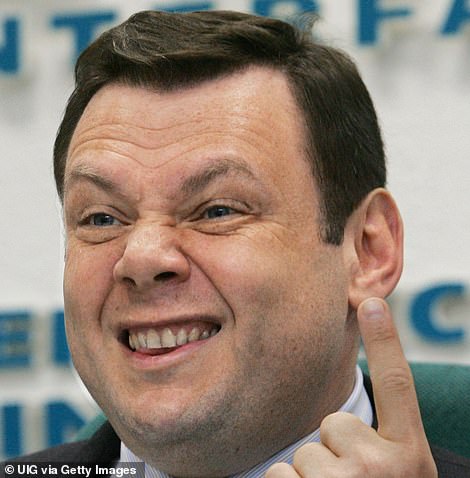 Mikhail Fridman was the seventh richest Russian, according to Forbes

According to US business magazine Forbes, Mr Fridman, who has Israeli citizenship, was the seventh richest Russian as of 2017, worth some £10billion.

The Russian father-of-five now calls Britain his home after buying Athlone House in North London for £65million in 2016.

He netted £3.7billion in 2013 when the trio and partners sold shares in Russian oil giant TNK-BP. 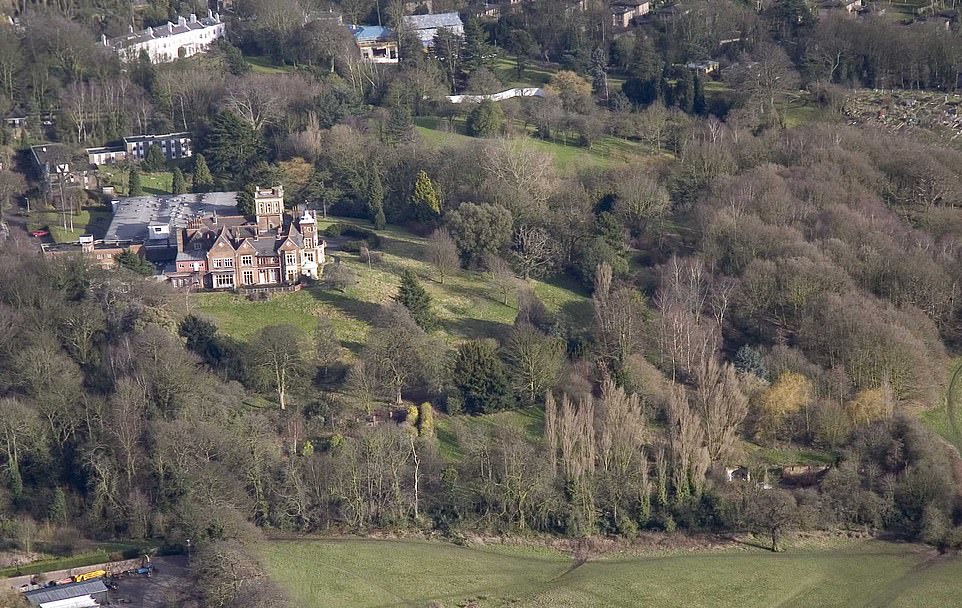 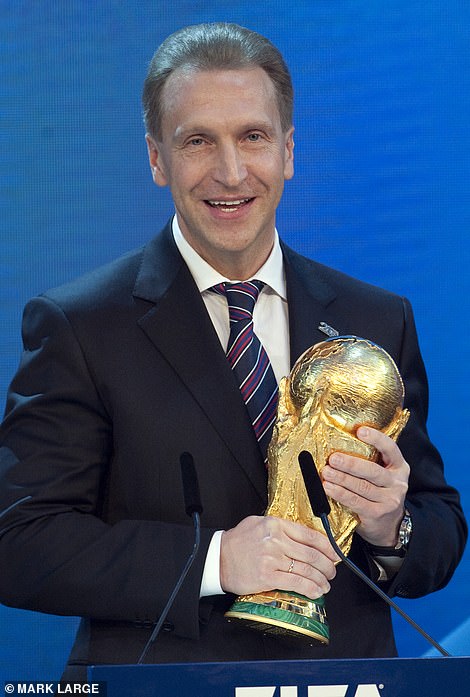 Exceptionally close to Putin, who he idolises, he has a London flat. Alexei Navalny, the Russian anti-corruption campaigner, said that he owns a 5,380sqft penthouse at Whitehall Court in Westminster.

The flat, valued at £11.4 million, is believed to contain six bedrooms and a sitting room with a view of the River Thames.

In 2016 it was claimed he used his secret private jet to fly his wife's Corgi dogs around Europe - including to Britain - for competitions because first class is 'too uncomfortable' for them.

The plane was used to chauffeur his wife Olga Shuvalova's Corgis to a show in Windsor, according to Mr Navalny.

Mr Shuvalov already faces controversy over his penthouse flat overlooking the Ministry of Defence in London, and a castle in Austria.

He infuriated Russians by appearing to mock the millions of people living in cramped flats measuring only 215 square feet.

Father-of-four lawyer turned politician Mr Shuvalov, 49, is number three in the Russian government after Mr Putin and Prime Minister Dmtry Medvedev, and is in charge of economic policy at a time of crisis caused by Western sanctions, low oil prices and a low value rouble.

A suave English-speaking fixer with a reputation for solving problems for Mr Putin, he headed the successful organising committee for the 2018 World Cup bid.

The ultimate Putin loyalist, he said last year: 'If a Russian feels any foreign pressure, he will never give up his leader. Never.

'We will survive any hardship in the country - we will eat less food, use less electricity or, I don't know, some other things we are all used to.

'But if we feel that someone from outside wants to change our leader, and that it is not our will but the will that is forced upon us, we will be united as never before.'

The 5,380 sq ft penthouse at Whitehall Court (pictured), officially owned by a company belonging to the minister, emerged in an investigation by Alexei Navalny, a leading opponent of President Vladimir Putin 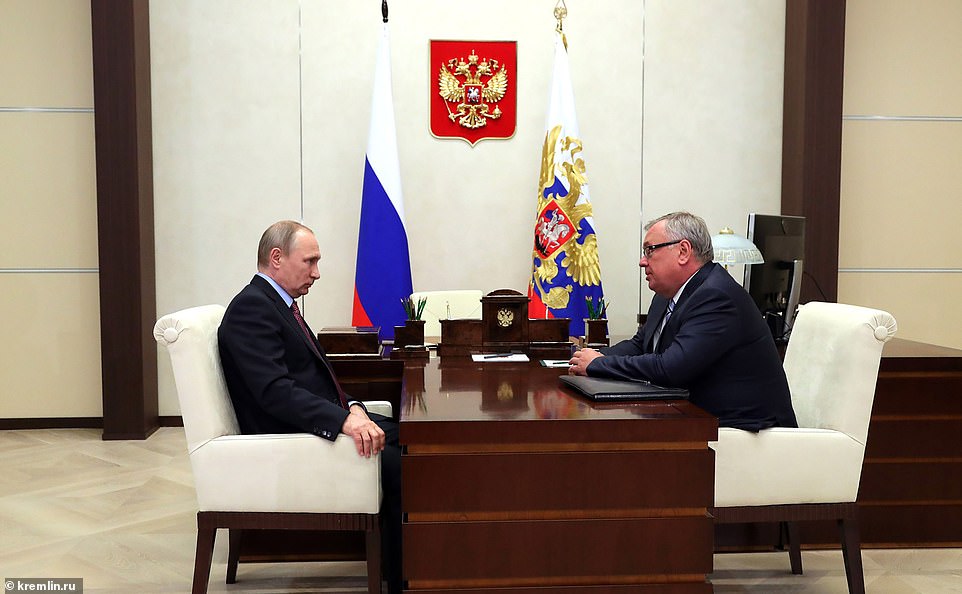 Andrey Kostin is president and chairman of VTB Bank, Russia's second-largest bank, which is controlled by the state.

VTB Bank's sister company VTB Capital, based in London, is not subject to any sanctions.

In 2018 it emerged the Chelsea Flower show was reportedly struggled to find backers meaning a Russian bank set up by oligarch Mr Kostin, who is currently subject to US sanctions, has been allowed to sponsor a garden.

It was claimed in 2020 that Kostin tried to cover up claims Vladimir Putin had secretly moved to Sochi during the pandemic, with president going so far as to have a replica office built to convince Russians he's still in Moscow, anti-Kremlin media reported.

The Kremlin said a photographed meeting between Putin and VTB Bank head Andrei Kostin on October 29 2020 happened at Novo-Ogaryovo - Putin's state residence outside Moscow - but critics claimed that the encounter actually took place in Sochi. 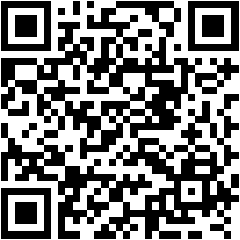